How to Purchase Course 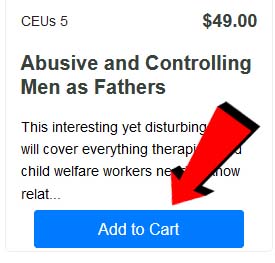 Select desired course, click “Add to Cart,” you will be transferred to the cart. 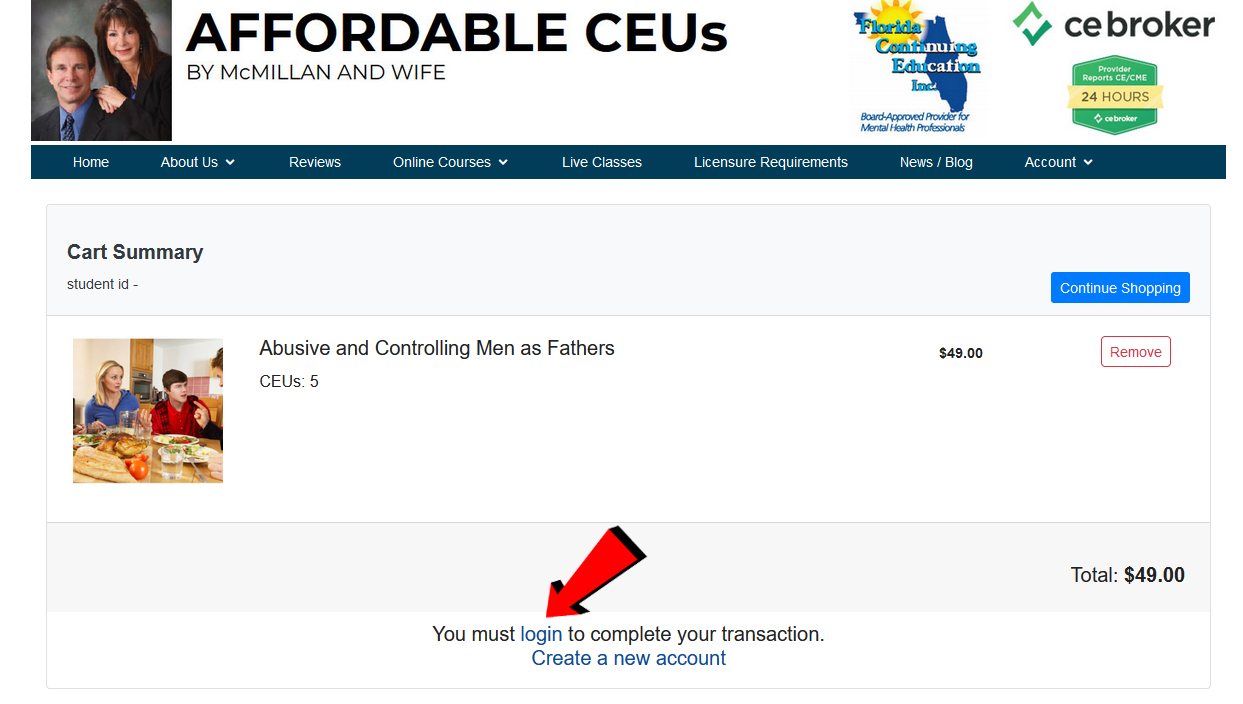 You must "login" or create a "new account". Click “Checkout,” you will be transferred to the checkout page. 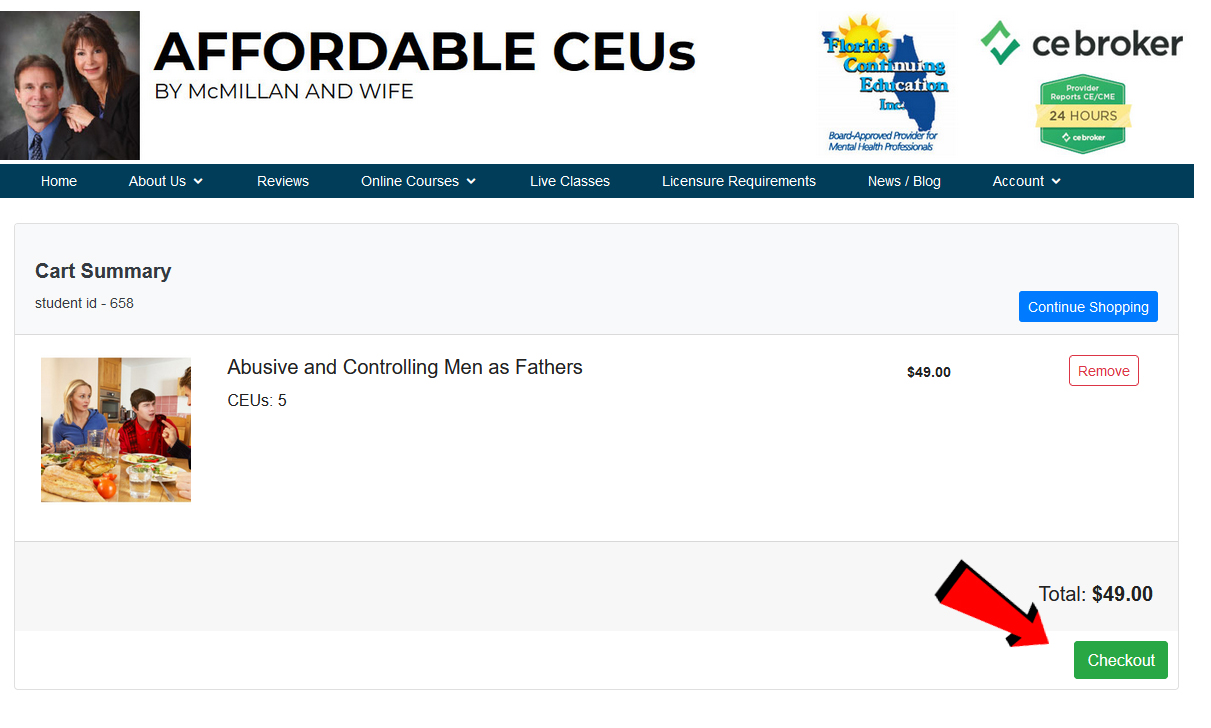 If you do not remember your password click “Lost Password” to reset. The email address and password you select will be necessary for logging in to your Affordable CEUs account. It is advised that you enter an email address to which you will have continuous access. If you do not receive the reseet email please check your spam folder. 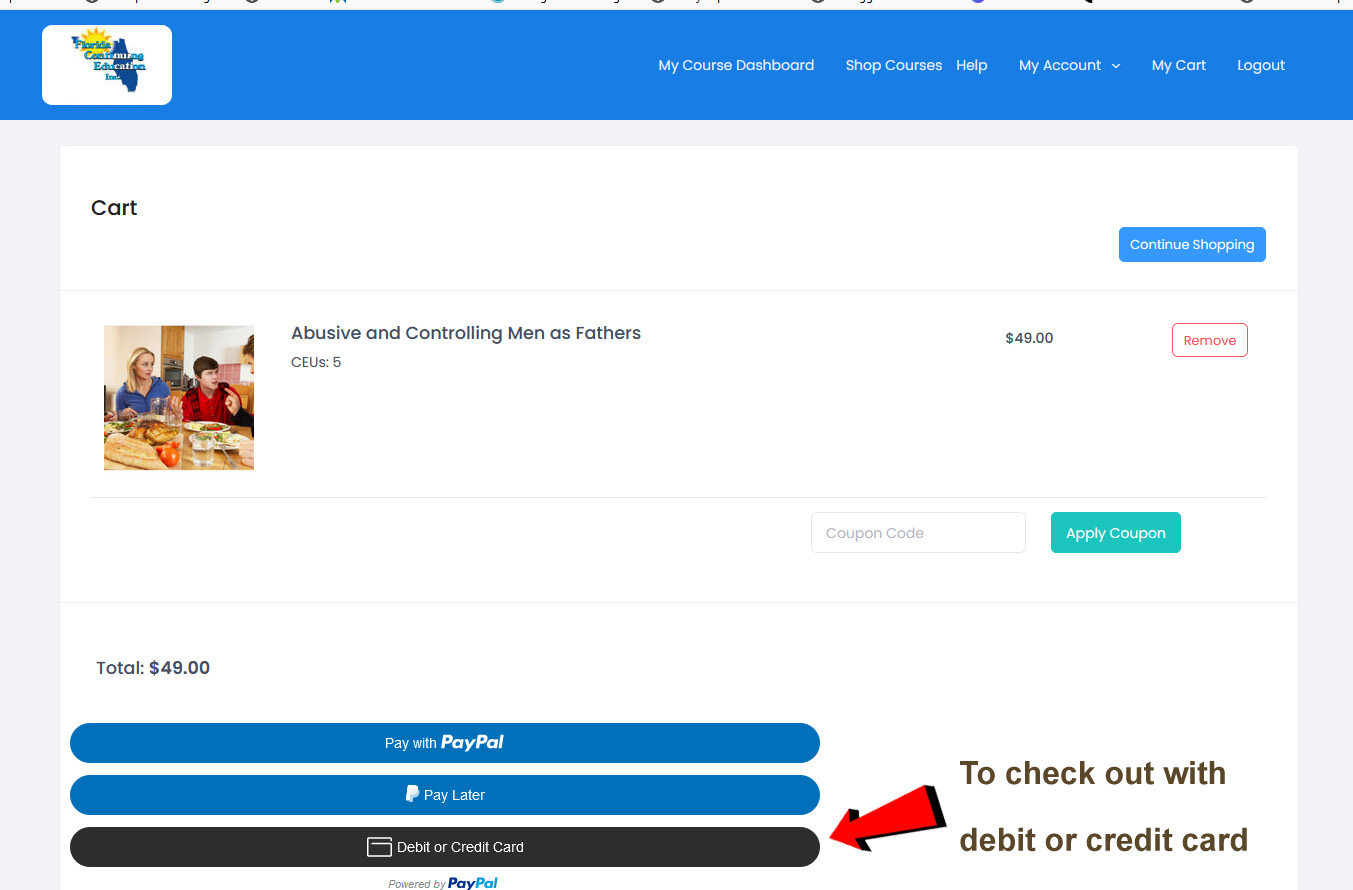 Enter coupon code if applicable. Click “Pay with PayPal” or "Debit or Credit Card", depending on your payment method and enter your payment information. Orders can be placed even without a PayPal account. After placing the order return to "My Course Dashboard" to access your course(s) online.

How to Study a Course 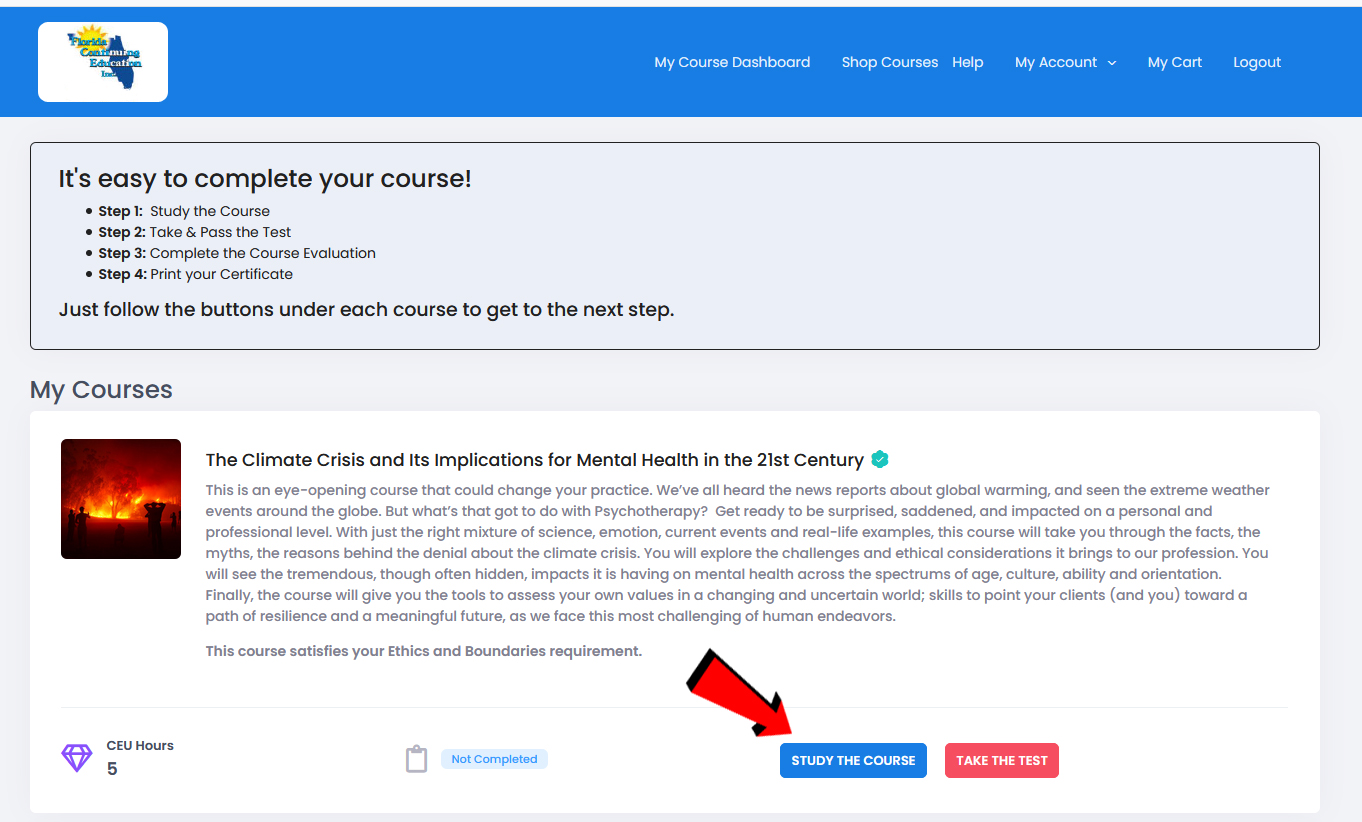 From "My Course Dashboard" click the blue "Study the Course" button. This will open the course as a PDF in your default browser as a new window. Read the course.

When you are done close the window and go back to the window with your "My Course Dashboard" to take your test. 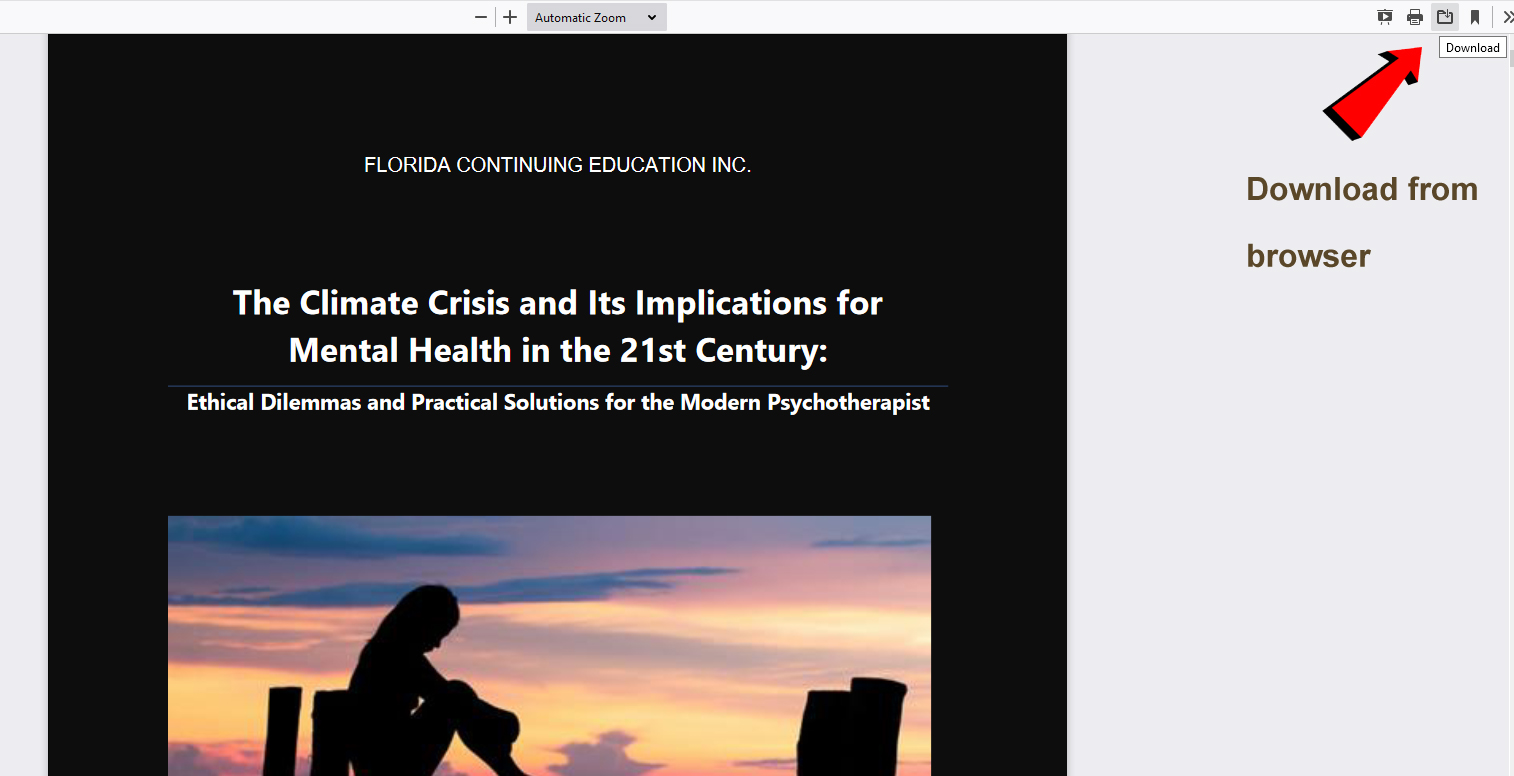 Most defualt settings will download this to your downloads folder on your computer.

How to Take the Test 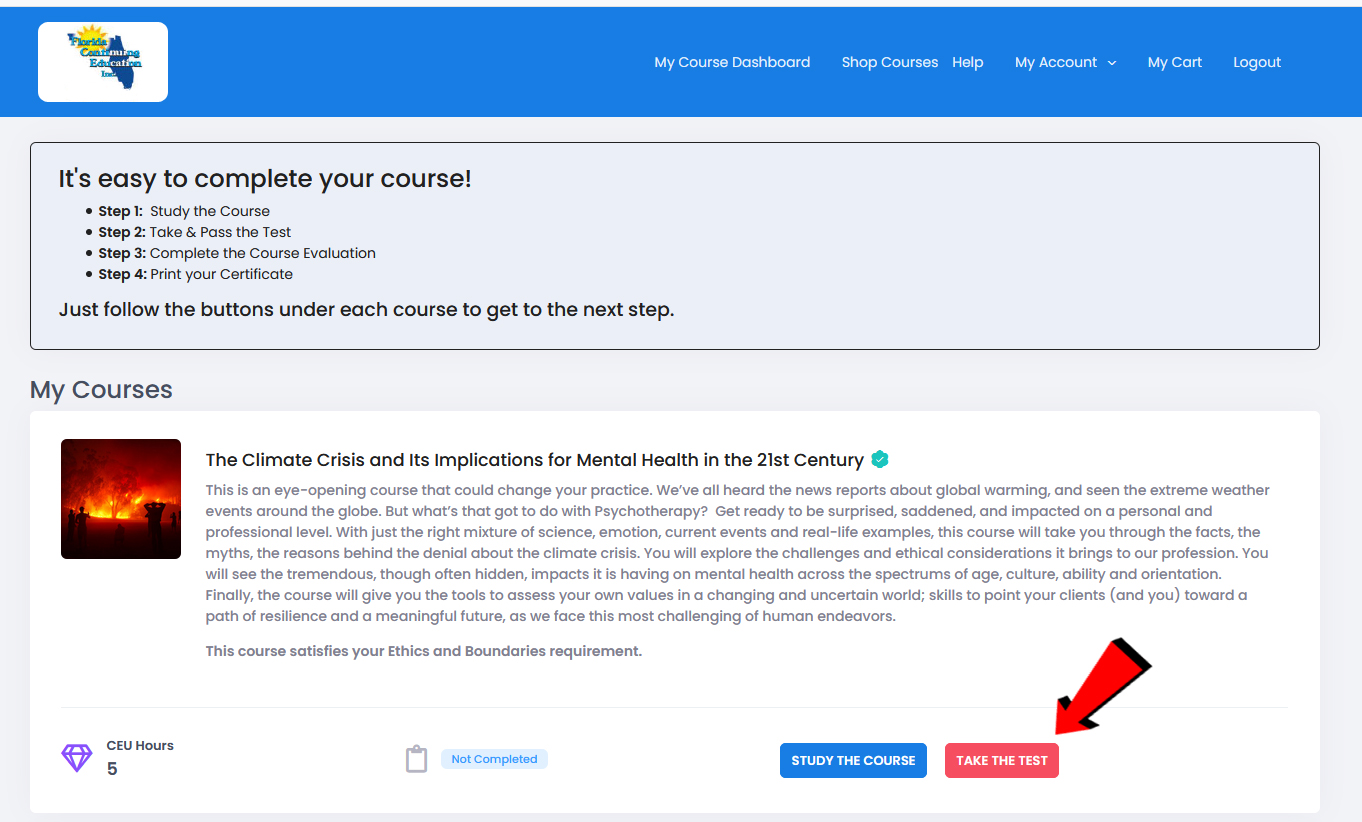 After reading the course materials, close the tab and go back to the student dashboard tab Click “Take the Test” red button

Click the “You Failed! Click here to retake the test NOW” button at the top of the page. To re-take the exam.

We believe in enjoying while learning, not stressing over a test. When you take our quiz, if you get an answer wrong, the website will tell you the correct answer. Then you can try again, as many times as you need to. That way you can relax, learn, and have peace of mind while you study.

How to Fill Out the Evaluation 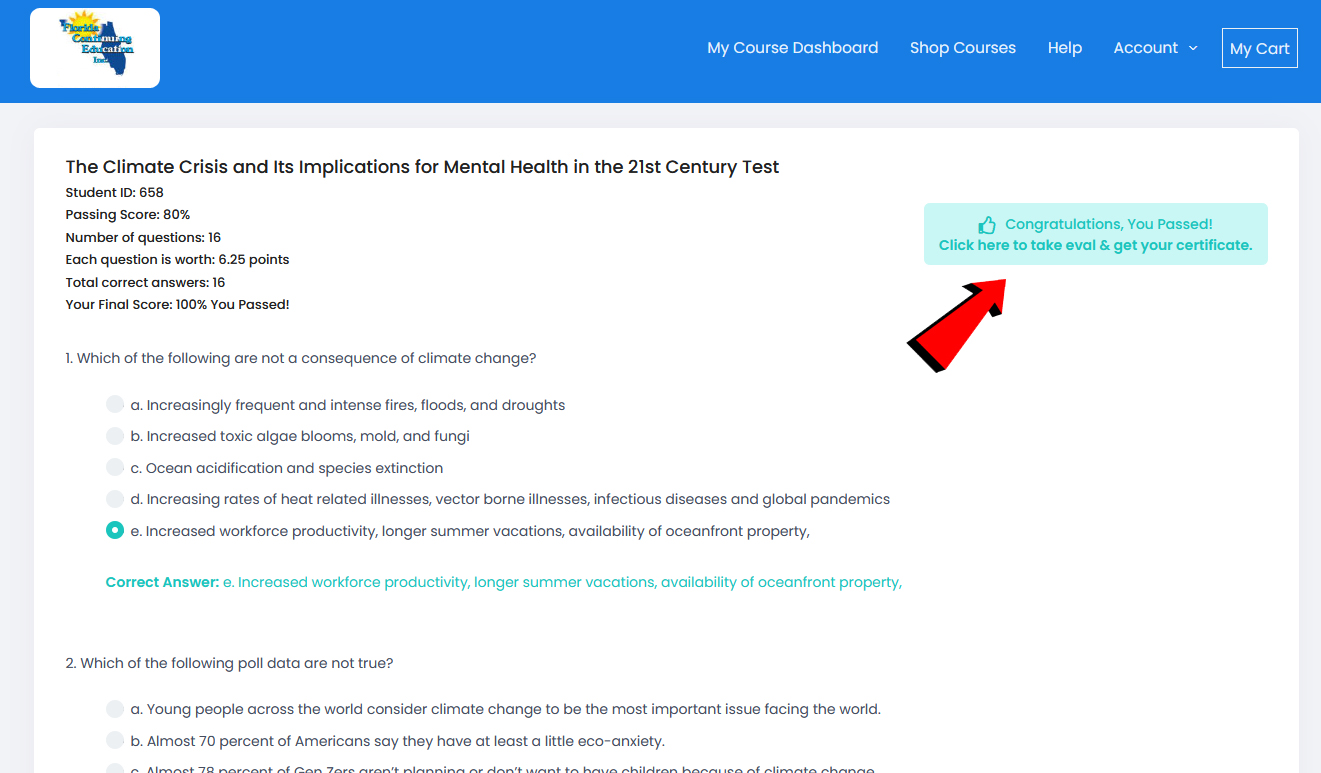 After the test has been passed, click the green button at the top of the page "Congratulations, You Passed! Click here to take eval & get your certificate." 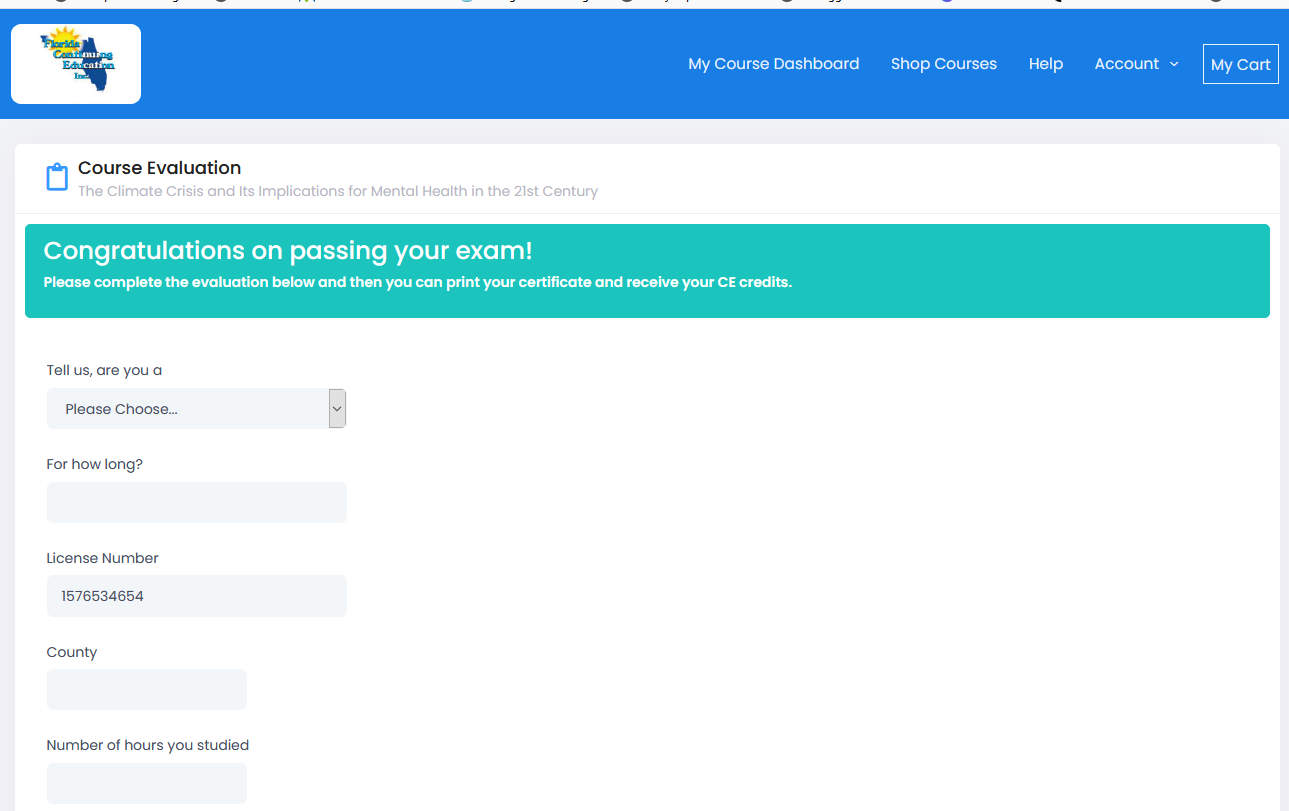 Fill out course evaluation and click “Submit” when completed.

Note: The evaluation form MUST be completed before CEUs will be sent to CE Broker.

How to Get Certificate 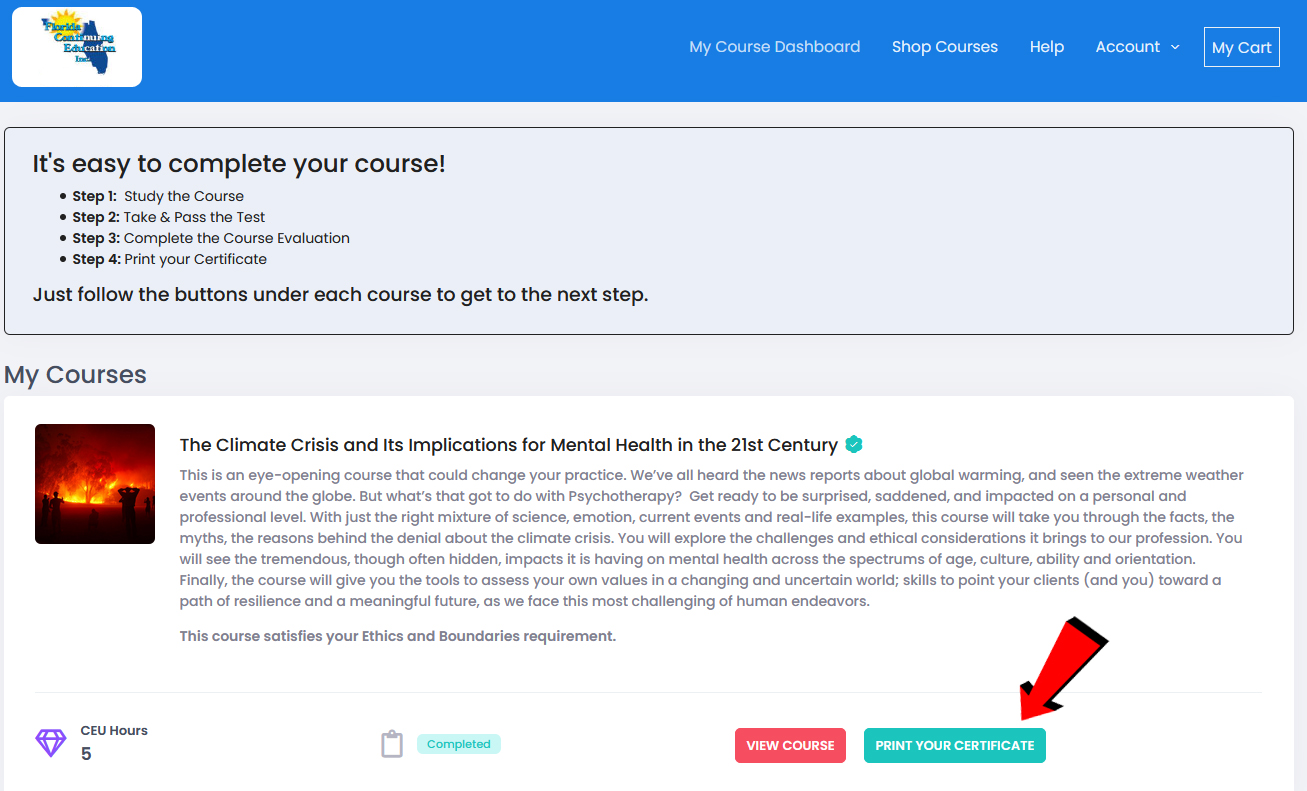 After you submit the eval you will be automatically redirected back to your dashboard. Click the red button "Print Certificate".

Note: The evaluation form MUST be completed before CEUs will be sent to CE Broker.

How will the Board know that I completed my courses?

If you are a licensee, after we receive your course evaluation(s), one for each course, we will enter your credits into CE Broker within 24 hours.

If you are a registered intern, we are not permitted to enter your credits into CE Broker. You must send the Board your certificates of completion the same way you provided them with your other documentation for licensure.

Why have my credits not been entered into CE Broker?

If you do not see your credits in CE Broker, it may be because you did not submit a course evaluation. The Board requires us to receive an evaluation from you (one for each course) before we can issue credit. Once we receive your evaluation, we will enter your credits within 24 hours.

If you submitted an evaluation but still do not see credits, please email Matt@AffordableCEUsbyMcMillanandWife.com.

What if I share an email address with another Affordable CEUs user?

Unfortunately, the system can only recognize one person per email address. In order to register for an Affordable CEUs account, each user must have his or her own individual email address.

Courses do not expire. It is suggested that you complete the courses in a timely manner to improve your performance on the course exam.

Please refer to to the Licensure Requirements page for all deadlines and expirations.

What Do I Do If I’ve Forgotten My Password or email Address?

If you’ve forgotten your password you can click "Reset passord" from the login page to receive an email with a new temporary password. If you forgot your email address, please contact us. One of our friendly and knowledgeable representatives will simply ask you to verify some information for your security and then help with your login information.

How do I self-report CE in my CE Broker account?

You can easily report CE from your CE Broker account by following these steps:

PRO TIP: You can also report your CE on the go using the CE Broker mobile apps.

How do I check my compliance in my CE Broker account?

You can check your compliance status in your CE Broker account at any time.

At the top of your user dashboard you will see the words “Complete” or “Incomplete” indicating whether or not you have completed and reported all of your renewal requirements for the current renewal cycle.

What if I have a complaint or a grievance?

If a participant or potential participant would like to express a concern about his/her experience with Affordable CEUs, he/she may e-mail Susan McMillan at Susan@CounselingHelps.org. You will receive a personal response within one week. Although we do not guarantee a particular outcome, we will do everything we can to ensure that the student’s complaint is heard and resolved. Possible outcomes include a full or partial refund, or credit for future courses.

Why do you call yourselves "McMillan and Wife?" That's sexist and demeaning to Susan.

Susan here. I often get asked this question. I totally get why some people are puzzled or even put-off, but there is a funny story behind why we call ourselves "McMillan and Wife."

Back in the 70's (when Matt and I were much younger), there was a very popular TV series called "McMillan and Wife" about a police commissioner Stewart "Mac" McMillan played by heart-throb Rock Hudson and his amateur detective wife Sally, played by the smart and sexy Susan St. James. The couple kept their marriage unpredictable while solving the city's most baffling crimes. They were considered a "superstar couple," and at the time, there was nothing demeaning toward women implied in the program title. In fact Sally was highly respected and considered by some to be the brains behind the operation. When we first began our CEU company, almost everyone was familiar with the TV show, and most people thought it was a great name for our business! Very catchy and (so they said)... right on target.

As we have gotten older and times have changed, the young people no longer remember the TV show, and it has become less acceptable to refer to the woman in a couple as the "wife," which of course I understand. I guess it doesn't bother me because I know I'm Matt's equal and so does he. In fact, some (maybe even Matt) might consider me the brains behind this operation.

Matt and I have gone back and forth many times about changing the name. But we have such a following with our brand over the 30 years that we have been reluctant to change it. Sometimes it's hard to break with tradition. But feedback from students of the 21st century is pushing us in that direction, so stay tuned (No pun intended). 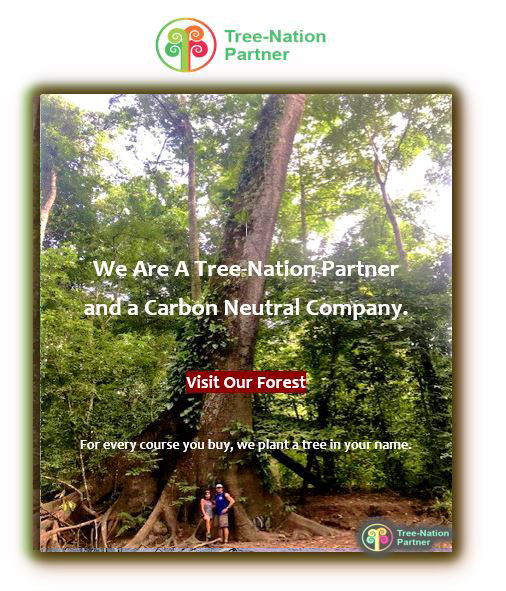 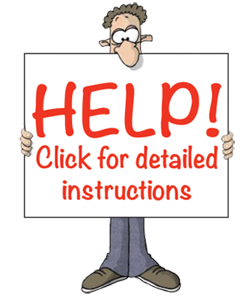 If you need additional help please visit our contact page to reach us.